Lily (short for Liliana) is my girlfriend, Lila is her mother, and Jorge (pronounced “hor-hey”) is her father.

Lila and Jorge were waiting for us at the airport, dressed in smart, casual suits. I was nervous as hell, and what little Spanish I knew collapsed out of my mouth. We couldn’t even exchange pleasantries. At one point I walked towards the car alone with Jorge, in complete silence.

On the drive from the airport we went through surprisingly little traffic, in part thanks to Bogotá’s “Transmilenio” bus service. It’s as close as they get to a commuter train, with whole lanes cordoned off for the busses on the biggest arteries in the city, avoiding what normally is hellish gridlock.

Soon we were at “Crepes y Waffles” (“wáf-lez”), a Colombian company that sells you know what. Lily was acting as translator. I was feeling a mix of tiredness (up since 4 a.m.), nerves, altitude and the need to pee, which for some reason I was trying to keep in.

I was also trying to smile, but conversing through a translator is an odd experience. It reminds you of just how much of a dialogue takes place in the gestures of the person listening – the nods, the raised eyebrows. Instead, all I was getting was blank, focused, uncomprehending stares. 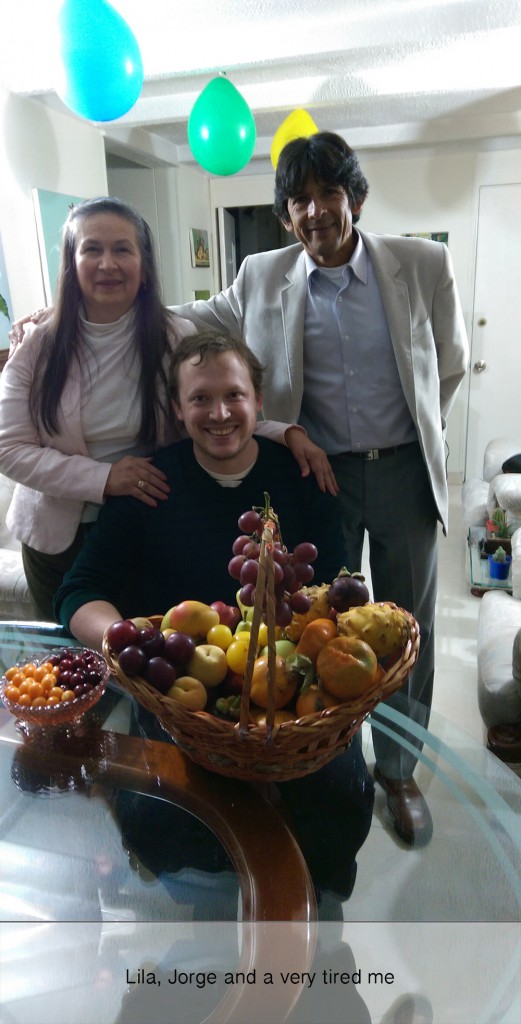 By the time we are going through the security gate of Lily’s parents’ apartment block, my eyes were heavy. We lugged our bags upstairs and through the door. Waiting for us inside were balloons, a welcome sign and a basket of fruit. Lily had told her parents that I was excited about Colombian fruit. They obliged incredibly well, making the bottle of Glenfiddich I got them at the airport seem totally inadequate.

There was the fruit we know: grapes, melons, cherries, plums, greengages, green and red apples, pears, kiwis, peaches, nectarines, clementines, big and small mangos, passion fruit, papaya and pineapples. But, they’re not like what we’re used to in the UK; market-bought fruit in Colombia isn’t comparable to off-the-shelf, waxed, freighted supermarket fruit in London.

The stars of this hamper were the many fruits I’d not had before. Granadilla (a sweet version of the passion fruit), curuba (banana passion fruit), mangosteens, yellow pitaya (dragon fruit), lulo, feijoa (guavasteen), guayava (apple guava), uchuva (like a chinese lantern) and chontaduro (peach palm). Click through the photos to see which was which.

Beautiful. And tasty. These fruit would make up a majority of the breakfasts I’d have for the following week. Every morning either Lila or Jorge would walk into my bedroom to wake me with a glass of freshly-pressed fruit juice. Not bad.

Anyway, I don’t dance. So, against my will Lily and I were soon off to meet a dozen of her friends at the horrendously titled salsa club, “Disco Jaguar”. Thankfully, it wasn’t full of cougars or manthers, but people in their 20s and 30s looking to get hammered on aguardiente. It’s a traditional drink, but tastes like mouthwash with extra alcohol, which Colombians knock back in relentless shots. The bottle was even wielded on the dance floor, constantly passed around, as Lily’s friends attempted to get the gringo wasted. They succeeded.