The next morning Lily and I were allowed to sleep in until 8ish. Lila made us hot tamale for breakfast – mashed potato, onion, rice, chicken and carrots wrapped in a plantain leaf. This is the kind of food that old women sell in the street in Harlem. In other words, it tastes like food that mums are supposed to make. It’s delicious.

I felt a little guilty, though, as Lila has rheumatoid arthritis, so she moves slowly. Everything she does causes her pain, including cooking me breakfast. But, she just gets on with things. And I couldn’t exactly ask her for cereal instead.

As breakfast went on, with the sun pouring in through the window and the welcome balloons still floating overhead, Jorge’s somewhat stern veneer started to seem less scary (and less stern), and his amiable character was showing around that sincere way he has of talking. I was warming to him, but my hangover stopped me from even attempting Spanish. Lily continued to translate 100% of what I said.

For dessert, I ate my first mangosteen – sweet, juicy white pulp around the tart, viscous flesh covering the central stones. Like many of the fruits I was going to eat in Colombia, this fruit bore little resemblance to anything I’d eaten before. 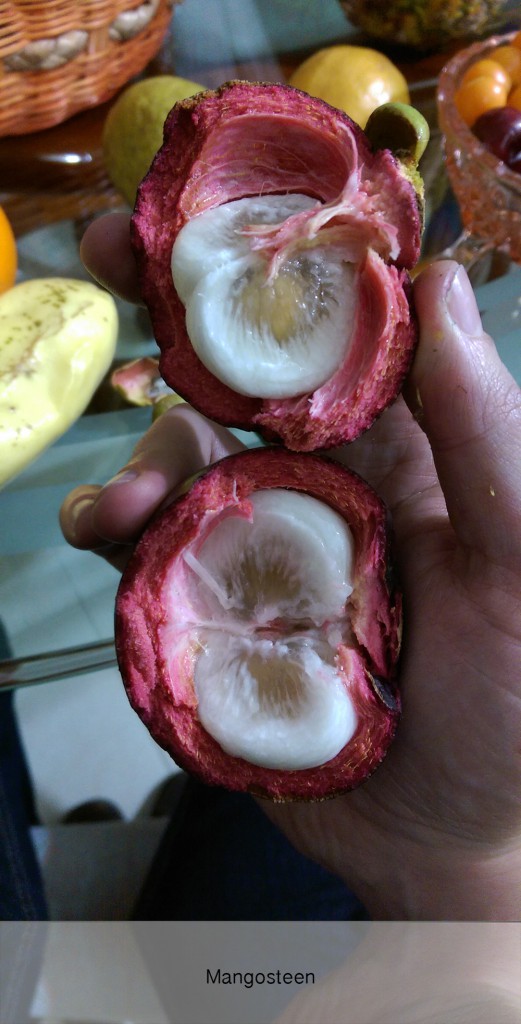 That morning we were heading off to an underground salt cathedral. Along the way I marvelled at Bogotá’s graffiti. It’s not just kids with cans; much of it has been paid for by the mayor’s office, and it’s a mix of beauty and politics.

It’s also a very pretty way of explaining the parts of Colombia’s recent history that earned them the reputation of being the most violent country in the world.

In 2011 a graffiti artist was killed by the cops. When protests erupted, the city government decided to change its stance to “if you can’t beat them, hire them”. Since then, many of the city’s most impressive works have been done by INK CREW, a band of artists commissioned to cover huge walls next to some of Bogotá’s busiest roads.

Click on the panoramas below to see them in full detail.

The painting above depicts a devilish man clutching a mining truck with the words “El aqua vale mas que el oro” (water is worth more than gold), criticising the poisoning of the nation’s groundwater by the mining industry. Nearby, there’s an anti-pesticide mural of a baby, veg and a cow with the caption “¿Que come tu comida?” (what does your food eat?).

The following mural is really bleak. It says that 3,026 victims from the social movement were killed with 95% impunity, and 3,600 victims from the Union Patriotica (a leftwing political party) were killed with 97% impunity. It’s a rough story – Union Patriotica was subject to political violence from drug lords, paramilitaries and security forces agents during the mid-1980s, leading to its eventual decline, virtual disappearance and extermination. Their killers walk free.

The next is no better. 4.1 million people in Colombia have been displaced by guerrillas and paramilitary organisations. That’s almost 1 in 10 people in the entire country. Many of them have made their way to Bogotá. In the photo below, you see that horrifically large number above a lush Colombian village setting. Just to the right (out of shot), a displaced family make their reluctant way toward Bogotá, with their homes achingly close behind them.

The next is of Jaime Garzón, a leftwing political satirist who was executed, by whom they’re not really sure, but it’s rumored that the murder was organized by Carlos Castaño Gil, Commander of the “United Self-Defence Forces of Colombia” (AUC for short), a narcotrafficking paramilitary/terrorist group. The AUC is relevant because… 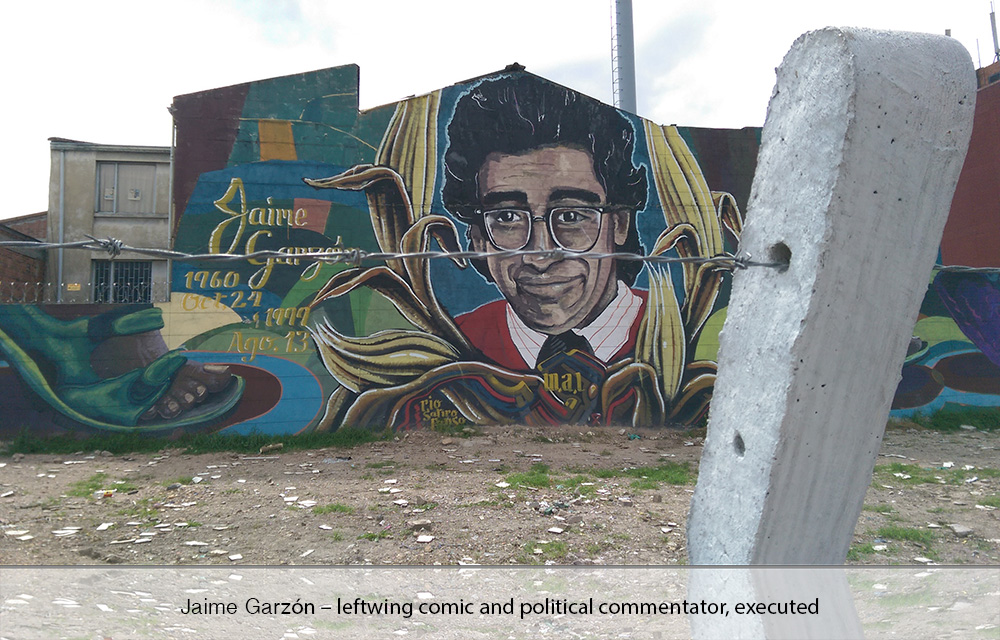 “Chiquita Brands International” has recently pled guilty to giving $1.7m to the AUC (the paramilitaries mentioned above). You may not have heard of Chiquita, but you do know them – this is the new name of the United Fruit Company (UFCO). If you’d like a little refresher course on UFCO’s actions in South America, click here.

Aside from everything else this notorious company did, in 1928 UFCO advised the Colombian army to open fire on striking UFCO employees, an event now known as The Banana Massacre. That was nearly 90 years ago, and things have not gotten better for unions – far from it.

This is what the above mural depicts. It connects these murders to Exxon Mobil, Monsanto, Coca Cola and other companies’ business interests. The quote you see next to the black box is by Pablo Neruda: “Podran cortar todas las flores, pero nunca detendran la primavera” (you can cut all the flowers, but you cannot stop the spring).

My favourite thing about this mural is that the city government paid for it. It would be like the mayor of Manchester paying for large scale graffiti showing Thatcher’s butchery of Industrial Britain. However, the mural seems far less surprising when you know who the mayor was who commissioned it – Gustavo Petro, who previously had been a member of “M-19”, a leftwing, militant guerrilla group. More on that later.

Perhaps the most famous mural in Bogotá is “El Beso De Los Invisibles” (the kiss of the invisibles). It is worth spending some time on. But first of all, take a look for yourself:

Here’s the story behind it. “El Bronx” is the nickname of an area of Bogotá that used to be owned and managed by drug lords. I’m not sure what it’s like now (they’ve tried various ways of cleaning it up), but it used to be the source of 90% of the city’s drugs. It had 5 kingpins running organisations several thousand members strong, with personal armies, drug dealers and merchants watching over the streets, CCTV cameras, brothels, slot machines and so on. Its buildings were full of addicts.

I found a breakdown of El Bronx’s economics:

A homeless drug addict hears about the Bronx and decides to go there. In the outskirts of the neighborhood, he is charged a $1 fee for the permission to get high in the neighborhood. Once inside, he can buy a joint for another $1; a gram of cocaine for about $3 to $6; or a gram of bazuco, a drug similar to crack cocaine, for approximately a $1. Once he has the drug, he can rent a room to get high in for slightly less than $2. Afterwards, he can buy a bottle of cheap whisky for $6, a bottle of aguardiente for $3, or a bag of leftover food called a combinado for somewhere between 12 to 24 cents. Prostitutes cost $3 to $6 (the same price as a fake ID or a stolen cell phone). When he runs out of money, the addict can rent a gun for $28 a day. With it, he can leave the neighborhood, rob as many people as he can, and come back to sell the cell phone he just stole, or spend the cash he pocketed in drugs, alcohol, food, etc. The gangs also sold grenades ($28) and pressed marijuana ($130-$160/kilogram). Each year, they raked in more than $44 million in profits. (source)

I can’t wait for the film.

In 2013, the army invaded El Bronx, pushing everyone out and bulldozing the shacks. The President had visited the neighborhood, and promised to rehabilitate the addicts. This blog post has an amazing experience of seeing the aftermath, when the addicts were allowed to return. Anyway, during the President’s visit, a TIME photojournalist took the below photo, “El Beso De Los Invisibles” (the kiss of the invisibles). 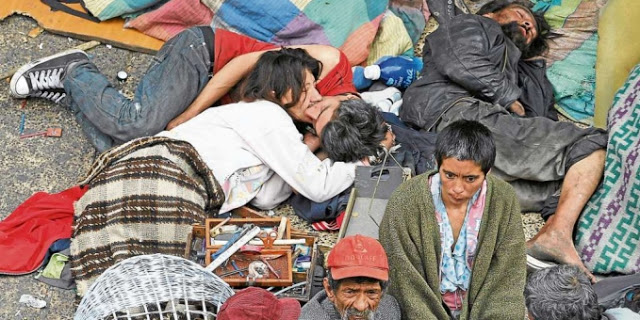 The photograph became famous. The couple were interviewed afterwards. They were both from middle class families, with good upbringings. They’d gotten into drugs, become addicted, moved to El Bronx, and survived by selling crack pipes to other addicts.

On the bottom-left corner, there is a new addition to the mural. Getafix, from Asterix and Obelix. Oh, and one other surprising thing. Cocaine used to be primarily exported out of the country. Now, despite the vastly lower price of sale in Colombia (around 1/10 of the price to that of the USA), 20% of Colombian-produced cocaine remains in “ollas” (pots) like this one.

The Salt Cathedral
Arrival in Bogotá