Everything is connected to the mountains.

Almost the first thing Lily said when I first arrived in Bogotá was, “If you ever get lost, look for the mountains. You can always see them. They are East.” The mountains hang over the city. Fog rolls over them, adding to the already unpredictable weather; in Bogotá it’s wise to wear layered clothing and waterproof shoes, and keep a rain jacket, sunglasses, sunscreen, and umbrella handy.

According to Jorge, there’s a housing bubble. In the east that bubble has nowhere to go but up into the mountains. So, at its base new high-rises are being built, with wonderful views overlooking the city, and above those, two vastly different building projects are taking place.

On the one side, there are slums: shanty towns built for those millions displaced by guerrillas and paramilitaries. These are illegal settlements, but so vital for those in need that the city is trying to legalise and formalise it somehow.

On the other side, there are giant mansions, built by Bogotá’s wealthiest, attempting to live away in secluded peace in the hills. Lily thinks that some of them, too, are illegal dwellings; the Bogotá City government are keen to preserve the mountain’s beauty.

But nature is also eroding the mountains’ beauty. Giant red and brown scars mar the mountainside, where mudslides have swept away everything in their path. They are eerie reminders of the tragedy of Armero, where mudslides triggered by a volcanic eruption wiped an entire town off the face of the planet (or, rather, burying it), killing 23,000 people.

Sitting on top of the mountains are a 49 foot (15m) high statue of the Virgin of Guadalupe (Virgin Mary), and the Basilica Shrine of the Fallen Lord of Monserrate. The latter was our destination for the day. First, though, breakfast.

I ate fruit continually between waking up and our departure at 1:30 p.m. Churros, and more pitalla (my favourite), freijoa, and a squeezy fruit, granadilla, that you peel like an orange. When all you have is the white pulp in the middle, you make a hole and squeeze out the insides (see below). It’s amazing.

What I didn’t know was that our day trip would start with a restaurant called Horno Y Parrilla, which specialises in gigantic slabs of salted brisket beef served with arepas, overly-salted potatoes, plantains, yuca and a spicy green sauce called “ají”. Eating fruit all morning had been a mistake. However, despite an overwhelming stuffed feeling, conversation this afternoon was even better. Lily’s translating process felt completely natural by now, and I was so relaxed I even tried, every now and again, to communicate in Spanish.

The restaurant was on Septima street, which had been pedestrianised since the previous Friday. The local street performers hadn’t caught up yet, so the road was mostly art-free. There were, however, two guitarists playing opposite the restaurant. Nearby, a policeman on a motorbike talked busily into his walkie-talkie. I waited for the cop to arrest the pair, but he took too long. Although, I saw them setting up in a new spot five minutes later.

Before getting back in the car, I tried yet another new fruit, a lumpy, segmented, creamy white thing (“anon”), which had shiny black stones in the middle. It fell apart in your hands, was deliciously messy, as sweet as milk duds and, again, it was unlike any other fruit I’d ever had.

Back in the car again, we passed a wall that the previous mayor had painted grey, then threatened artists with arrest if they painted on it. Thanks to a social media effort, 300 artists responded by turning up to cover the whole thing. Fun.

Next we were stopped by a long procession of people dancing through the streets, dressed in all different styles, like a miniature carnival. We detoured, missed a turning and ended up on the “circunvalar” (ring road). 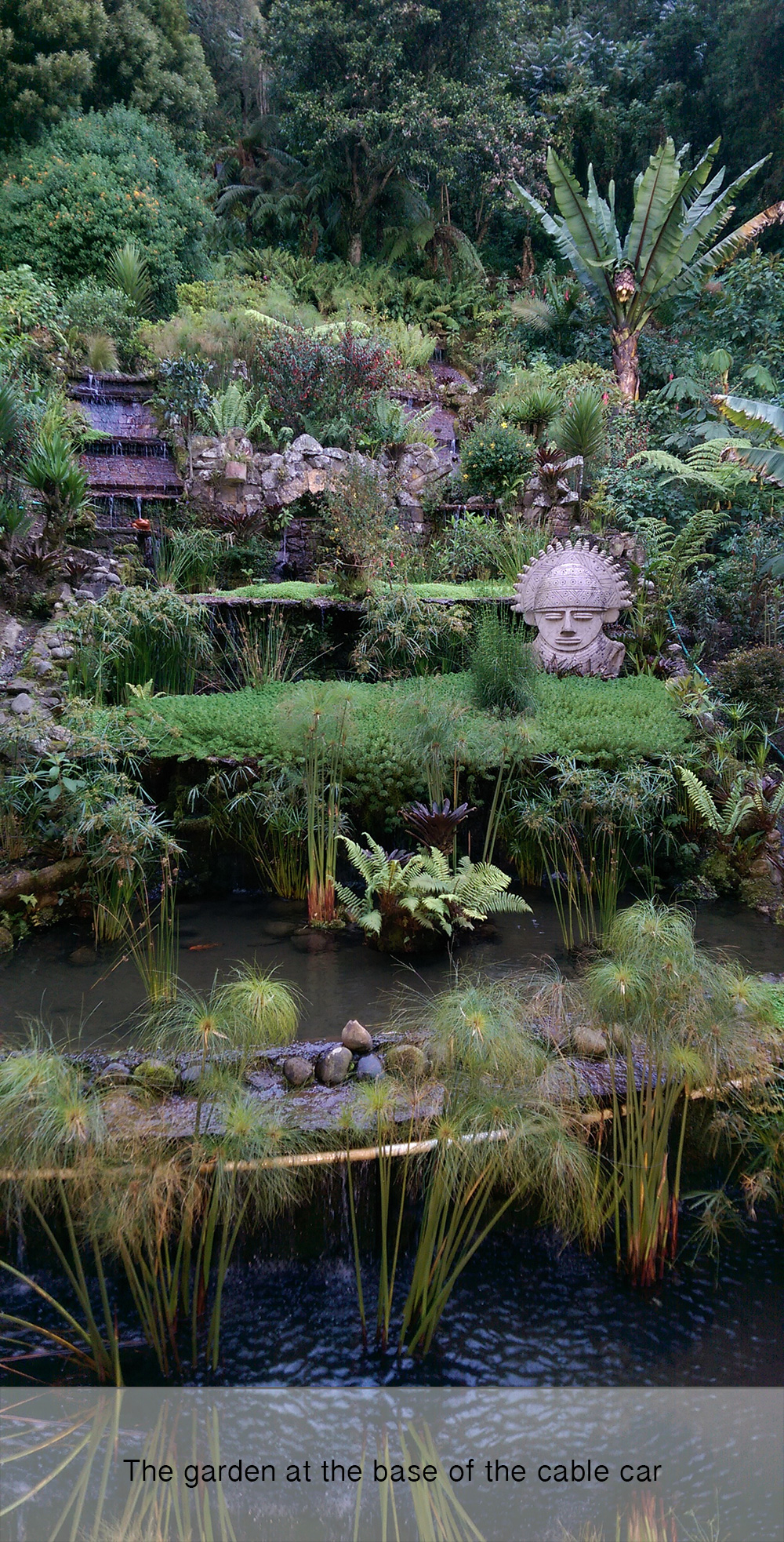 Eventually we were back on track, and made it to Monserrate and the orchids growing near its base. I had to stop myself from telling Lily’s conservative parents that the orchids are shaped that way to look like the back end of bees. Orchids try to get bees to attempt to mate with them, to effectively be more sexually attractive to bees than any other flower. It’s a floral beauty pageant. Orchids are Colombia’s national flower.

I’ve sped that video above up about 3x the normal speed, but the cable car journey up was (like all cable cars) very tranquil. There were three other ways of getting u the hill. One option was the train, which was closed by the time we got there. Alternatively, we could have hiked up the mountain, but that would mean risking knife-point muggings (the hills aren’t safe). The third option was to crawl up, which is in fact a frequent occurrence here. Hopeful worshippers regularly take this arduous pilgrimage on their knees. They go up asking for miracles. I assume when they get to the top they ask for an ambulance.

On top of the mountain the view is rather wonderful. Lila and Jorge went to pray at the church. Lily and I took a walk. After a while, the four of us went to the mountaintop restaurant for a coffee. We sat at the table and ordered drinks.

Then it hit me. I still had a speech to give and this is probably the best place in Bogotá to give it. If nothing else, the location might distract them from listening to closely to my terrible Spanish. Now was the time.

I took my phone out, loaded up my speech and read through the first few sentences in my head, trying to get both my brain and my tongue to relax. This was a week since I’d written it, and a couple of days since I’d last practiced. I took a sip of my beer and looked up to face them.

I’d like to briefly pause here to remind you that I am English. Ridicule and sarcasm aside, emotional outpourings aren’t my strong suit. So, reading an earnest, consequential “I love your daughter” speech, in Spanish, to my relatively new girlfriend’s parents, who I still don’t really know…I won’t go into all the gory (and personal) details, but Spanish is way harder to read when you’re nervous.

Afterwards Lily’s mum sat there with her head in her hands, crying. I had no idea whether this was good or bad crying. Lily assured me it was good.

When she’d composed herself, Lila told me she knew I was special because Lily had good taste. Jorge said he was relieved because Lily’s not the best at communicating, and he didn’t know much about me. Then he said I was an honest guy, and that my words had obviously come from the heart, and then something else about love. It was awful. Then he welcomed me to the family forever. Forever.

I have since asked Lily to do a similar speech with my parents. I would like to compare results.

Incidentally, there is a myth about Monserrate – that if you bring your boyfriend up to top you will never get married. Carried away by the moment, I told Lily’s parents that I hope to break that myth. I really don’t know what has happened to me. We’ve been dating only 6 months.

The sun went down. Bogotá was lit up. Beautiful. We took a some more photos, then went home. I explained what I did for a living, showed some videos, and we slept.