We went to an island resort, with around 8 other Colombian friends and the bride and groom. Beach, hotel, all inclusive, cocktails… 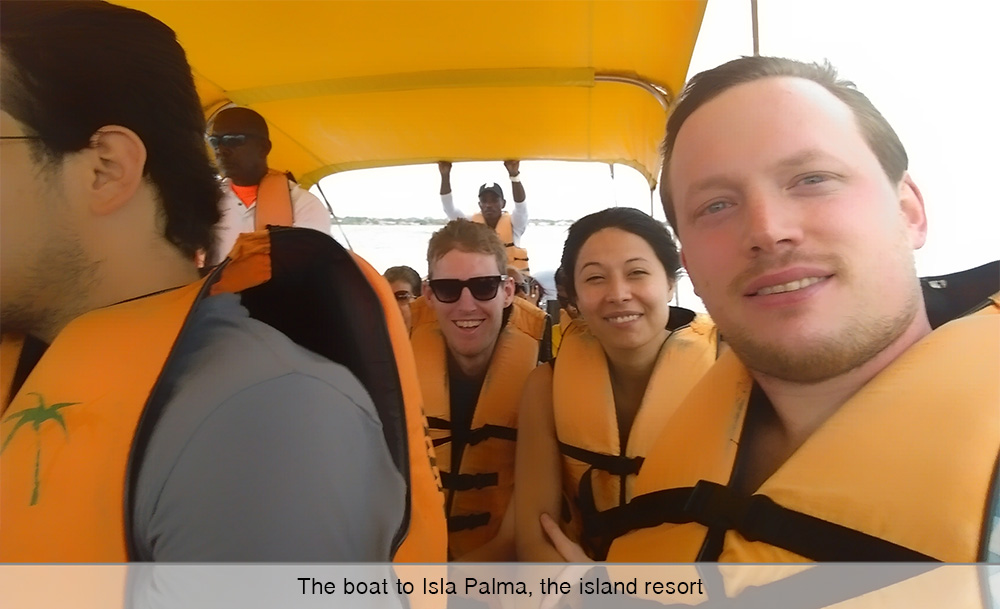 I should preface what I’m going to say below by quickly saying that this was fun. The island was fun. All of us had fun. It was sunny, relaxing and enjoyable, especially for Lily and her friends who haven’t properly hung out like this, all together, for years. That said, island resorts make me uncomfortable, and…

…Isla Palma was the least exciting thing we did in Colombia, with easily the worst food of the trip. The hotdogs were so processed we joked that they might have been reconstituted out of the remnants of earlier hotdogs.

The most inspiring part of this trip was that I didn’t burn, at least not too badly. I’d told Liliana (who was overly confident that she could protect me with multiple layers of suncream) that with my naturally pink skin, a slight burn on a beach island on the equator was my best case scenario.

On the first night, I learned from Lily’s friends that giving a “good intentions towards your daughter” speech to your girlfriend’s parents is an outdated Colombian tradition that not one of them had ever been through. I made a few jokes about my bad luck, then Lily told me she was worried how much I’d been pushing back since getting to Colombia.

It’s true, I was. But, we’d only first kissed in August last year. Within a month we’d moved in together. A few months later we were living in New York together. And now here I was, in Colombia, giving a speech to her parents, on a holiday that revolved around a wedding, celebrating our 6-month anniversary in an island resort and finding out that this special treatment with her parents was reserved for “the one”. This was supposed to be it. I’m in the last relationship I’ll ever be in.

The scariest thing is that it feels completely natural to say it. She’s the one. I guess sometimes you just know.

Anyway, I had more disturbing things to feel uncomfortable about: being waited on day and night. The whole idea is off-putting for me. Last year I’d been in a similar resort in Zanzibar, and described it as:

An old colonial resort island, home of East Africa’s illegal slave trade 90 years ago, now home of gelatinous pensioners sweating overpriced cocktails into their poolside loungers. A legion of local gardeners is employed to prune, mow and arrange the rows of shrubs and flowers lining every pathway. And yet, not even this neatening army could do anything about the ants. Little black workers, scurrying around, doing the Queen’s bidding.

So yeah, not a fan of resorts (they seem to invigorate my post-colonial guilt).

Just across the water from our Colombian paradise, there is a town so poor that its dark-skinned children have blond highlights in their hair from malnutrition. I know this because the village is in the spot where the speedboat takes you from the mainland to the island resort and back. When a boat is passing through, the kids hang out on the small wooden dock, some healthy, some with distended bellies, helping tourists put on their lifejackets, hoping for tips.