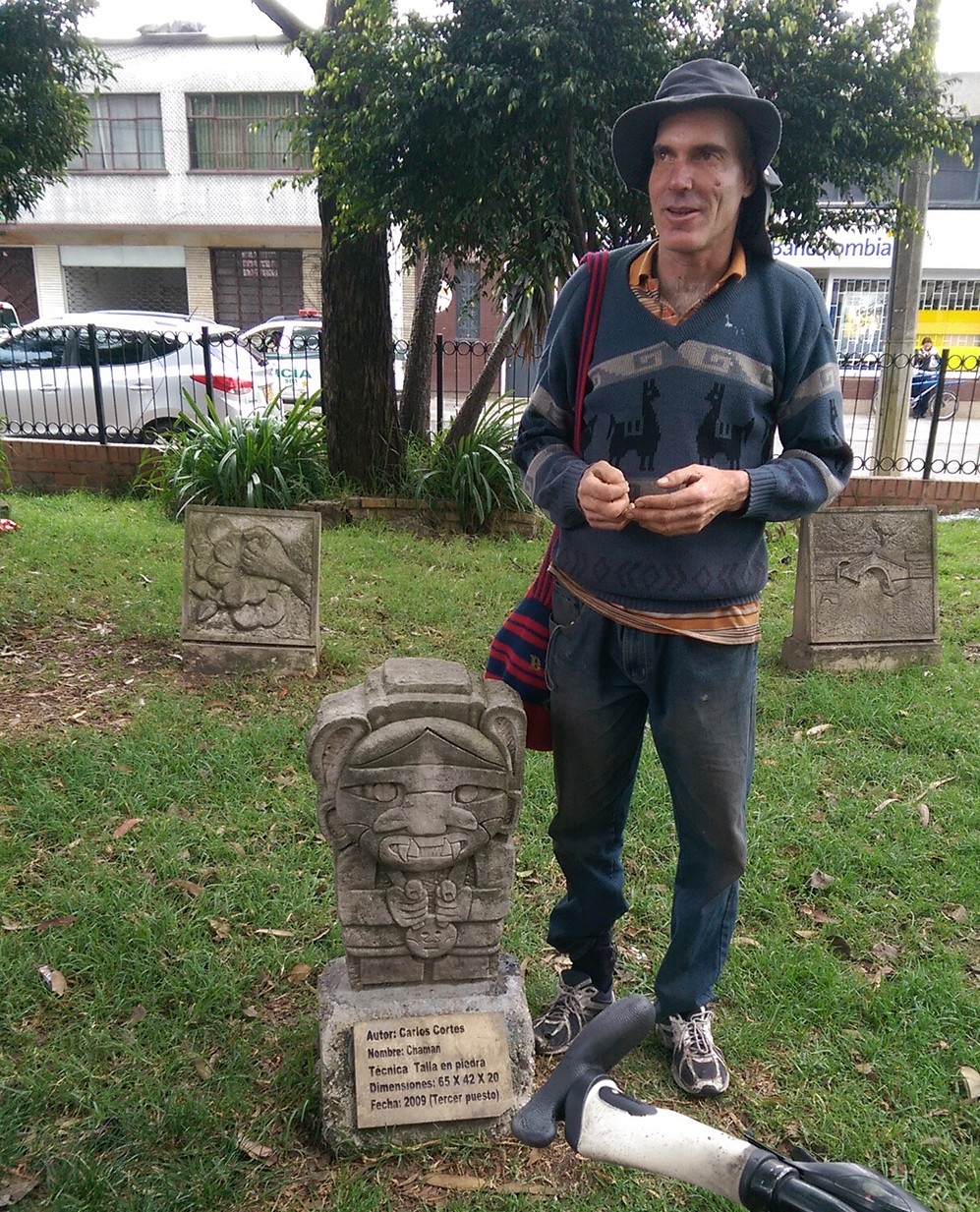 Our guide, Mike César, showed a complete disregard for traffic lights, even when there were oncoming cars. He rode against traffic on busy streets and totally ignored one-way signs. He also ignored what I would have thought would be a cardinal rule of tour guiding – “no tourist left behind”. But, with the weight of the previous day’s speech now fully off my shoulders, chasing after Mike was, really, really fun.

Mike’s an ex journalist ex pat who set up Bogotá Bike Tours after over a decade in South America (read his blog, or his bike blog). Bogotá is a good place to tell people stories about, and Mike knows a lot of them. It was a pleasure for all of us, nervously following him around the city.

For the sake of keeping this as short as possible, I’m going to completely ignore routes, timings, districts and so on, but this whole trip took about 5 hours. It was the best tour I’ve ever been on.

We passed the huddled group of emerald street traders on Avenue Jimenez. Gram for gram, these emeralds are worth twice that of diamonds, and 50 times as much as cocaine. They stand there in suits, squinting through magnifying glasses, their bodyguards at standby, trading tens of thousands of dollars a day of tiny green stones.

In San Victorino Plaza we saw a man wearing a sign saying “100 pesos”. He’s a ‘minute swap’ man. Calling certain carriers will be cheaper from your mobile phone. So if you want to call a different carrier, you can go to these guys and swap minutes, or purchase them for this price (100 pesos – roughly 2p – per minute). He was near another novel street trader. A man with a fruit cart is normal enough, but this one had replaced shouting about his wares, by playing a loud automated message on repeat through a small amp.

Mike told us of Colombian nationals living their whole lives in the USA, coming to Bogotá on holiday. Their 2 week vacation would become a 3 year one once the soldiers had caught them. He also told us of an Israeli Colombian who’d just finished national service in Israel. He came to Colombia to celebrate his new freedom, got caught by the army and immediately had to do service here as well. FML.

At the next place, a cevicheria, a sign above the door said “El comienzo de un gran final” (the start of a great finish). It sold “rompe colchones” (“the mattress breaker”), otherwise known as borojo juice. It’s an aphrodisiac made from the borojo fruit, wine, whisky, cocoa powder, oysters, a cup of milk and a real live crab. They put everything in a blender, including the crab. Live.

Next we went to a giant market, where Mike took us from stall to stall, tasting fruit. Some we’d had at Lily’s, but some were new. We ate chontaduro (tree tomato), passionfruit (maracuya) straight from the fruit half, sweet passionfruit (granadilla), higo (prickly pear), nispero (loquat), papayuela (mountain papaya), and two roots, the cassava and the yacon, both sweet and both supposedly cure-alls. This brought the “fruit I’ve never had before” tally in Colombia to 12. Not bad.

Onwards again, this time through a “tolerant zone for high impact social activities” – what Mike said the official name was for the red light district. There are two locations in the city where sex workers are allowed. In the brothels it’s possible to somewhat control what goes on. On the street, though, child prostitutes stand in doorways, waiting for their next client. It was pure poverty tourism, our least favourite part of the bike tour.

Next up we entered a small coffee factory. There are three types of coffee in Colombia: good beans, which are exported, damaged beans that are kept for home use, and for some reason Colombia also imports a smaller bean from neighbouring countries for home use. We ate the flavourful good beans, followed by the lower-quality ones, which are burned to hide their deformities. The unfortunate truth is that 80% of the coffee consumed in Colombia is either these damaged beans or lower quality imports – they don’t know how good their own coffee can be.

In the coffee factory’s cafe, I talked to three of the European guys who were on the tour with us. They were ex-pilots of large commercial airplanes, working for Boeing, teaching Avianca pilots how to fly 777 and 737 planes with new wings and new Rolls Royce engines. “A 777 with these new wings climbs like a homesick angel.” Not relevant to Colombia, but a good enough phrase to include here.

In a small statue park, we met “Chinches de la Calle”, a rap group that gave us a couple of songs. Then we passed a park that was built on what used to be a children’s cemetery. As the mayor said, “the living are more important than the dead”.

On one side of that park is the painting of a large hippo. The story’s a fun one. Pablo Escobar, the drug lord, used to have imported hippos on his ranch, where his drug money would fly in. When he was finally executed, all of his animals (he had a zoo) were either bought, killed, let back into the wild or adopted. All, except his hippos. And where once there were 2, now there are 50 or 60 roaming around.

The government recently shot one of the hippos, seeing whether it’s a possible way of getting rid of this invasive species. The photo they took with the dead hippo, kneeling down next to its corpse, grinning, was almost identical to the photo of them kneeling next to Escobar’s corpse.

Just next door was a wall where a Colombian was shot and killed for illegal graffiti. Later on, Justin Bieber visited this same wall to do a spot of graffiti, but he had a police escort. There were protests – why should one guy get killed, but an American gets his own police escort?

A few minutes later we were passing a couple of Brazilian traffic lighters, pretty good ones too. We watched a few shows, paid a little and moved on.

Our next destination was the spot where Jorge Gaitan was assassinated in 1948. He was a politician and leader of a populist movement that (among other things) called for accountability of those responsible for the banana massacre. His murderer was killed by an angry mob, so it was never determined what the motives for the execution were, but organisations suspected include the USSR, CIA, the Colombian Communist Party and many others.

Gaitan was the country’s leading opponent to violence, and was trying to get his peaceful leftwing party elected. Fittingly, his murder sparked off violence between liberals and conservatives that spread across the country, facilitated the rise of communist guerrillas and 15 years of fighting, known as “La Violencia”, which led to the death of roughly 200,000 people, and the displacement of 1,000,000 more.

Three things have lasted from Gaitan’s assassination. While Mike told us this story, we stood on old tram tracks that hadn’t been used since the day Gaitan was executed – too many people died from angry mobs overturning tram cars (see the photo above). Second, the Communist Guerrillas that had been initially inspired by La Violencia were fought by USA-backed paramilitary groups, causing violence, displacement, narcotrafficking and war crimes that still go on in the country (albeit much less recently). And third, Gaitan’s face, which is still on every 1,000 peso note.

We passed a bull fighting arena, which was closed – and it will stay closed. The mayor stopped bull fighting, partly to do with animal cruelty, but also because the only fighters popular enough to fill the stadium are Spanish. However, Colombian bull fighting is perhaps more excusable than Spanish – they do eat the meat afterwards. Testicle soup, too.

Our next stop was the most fun location on the trip. It was a tejo (“té-ho”)…room? It’s the national sport of Colombia. They chuck heavy stone or metal weights 30m across a room at a clay board, hoping the weight will stick. It’s like throwing horseshoes, but with gunpowder. That’s right, gunpowder. Four little gunpowder pouches sit near the centre of the clay board. If the weight lands on it, it goes bang. Really, really loud. You don’t pay to play tejo, but you are expected to drink beer.

Finally, our tour ended in Plaza de Bolivar. We bought Guama (white fruit from a long stem, with large black pips), and mamonsillo (mother’s nipple), a sweet and sour lychee-like fruit which is very difficult to bite or suck the fruit off the stone in the middle, so you end up sucking it for ages – much like your mother’s nipple.

The Plaza is surrounded on three sides by parliament, the mayor’s office and the courts of justice. This is the site of an attack on the courts of justice, enacted by M-19, a guerrilla group that stormed the courts and took many of the justices hostage. Incredibly, the Colombians refused to negotiate with terrorists, and instead rolled up with their tanks and just blew the place apart. 11 justices died.

Since then, the members of M-19 have negotiated with government, received clemency for their actions and disbanded. One of their members is now mayor of the city. He is now the literal neighbour to the courts of justice. Amazing.

We got home in time for plátano soup (plantains and meat), plus 1/2 avocado, 1/4 giant avocado (for comparison), and just as i was telling lily I was unable to eat any more, the smell of fried intestines wafted from the kitchen. Dessert was a slice of wobbly arequipe cake.

is Colombia’s violence in the past?
Monserrate