The next morning, over scrambled eggs and arepas, I asked a question: is Colombia’s violence in the past? Lily’s Dad answered, with Lily translating what she could.

The right-wing, narco-trafficking, unionist murdering, corporate-financed paramilitary organisation, the AUC (the one that was paid by “Chiquita Brands International” in cash and weapons) negotiated with the government and disbanded. But many were extradited to the USA, and are now in US prisons. Other militant groups won’t risk ending up in jails. ELN is still active. M19 is now in politics.

Jorge didn’t seem to happy about the way things were going. I asked him whether he at least feels like the violence is passing.

The answer was a resolute “no”. Jorge got very animated, his voice stronger than before, his body language more firm, his hands beating out his points on the table. While he spoke, Vivaldi’s Spring played in the background.

Lily tried to translate, but Jorge wouldn’t stop. Eventually, Lily started to argue with him, but Jorge actually shouted her down, yelling, “PERO, PERO, PERO, PERO…NO NO NO NO” while she spoke. Lila joined in. Soon Jorge was at it again, pointing his fingers and talking faster and louder. He had stopped blinking. Lily began to laugh and disagree, which made Jorge even more animated. He stood up.

There was no more translating, so here’s what I picked up.

I thought they’d said enough. I thanked them for breakfast, in adorably bad Spanish: “Es mi desayuno favorita”. I asked Lily to translate that I wished I could thank them enough in Spanish for their hospitality. “It is with love”, Lila replied. The argument was finished. Jorge offered me a glass of water to wash the pill down. His hand was shaking when he put the glass on the table.

We ate a small plate of guanabana with the stones removed. It was cold, refreshing and limp – just what we needed. Lily and I went back to work.

Later, Lily told me what her dad had been saying. Colombia had had good a president, Albaro Uribe. His strategy was to kill all the guerrillas. It was a military campaign, with the full weight of the army behind it. The country began recovering. Before, you couldn’t go out of Bogotá, it was dangerous. Now it’s less so. Uribe had been in power for 8 years, twice the normal amount, and although he’d wanted to do 12 years he wasn’t allowed.

Uribe had, by then, got a huge amount of power and popularity. So, he supported the next president, Juan Manuel Santos, and everyone voted for him. But Santos instead focused on negotiation with FARC. And Jorge believes that these negotiations will fail. He has no faith in the current administration, perhaps government as a whole. [I later found out that Uribe had been the one who negotiated the AUC’s disbandment, so he wasn’t wholly against negotiating with terrorists].

The current peace process may be necessary, but it’s full of problems. FARC are still killing people, they still have weapons, and they’ve done a huge number of human rights abuses. But in these negotiations they want immunity for what they’ve done.

Lily believes that violence is now a part of Colombian culture. “When Colombia won the first match of the world cup,” she said, “ten people died. And they were celebrating!”

Colombia is full of chaos and diversity, but it comes at a price. 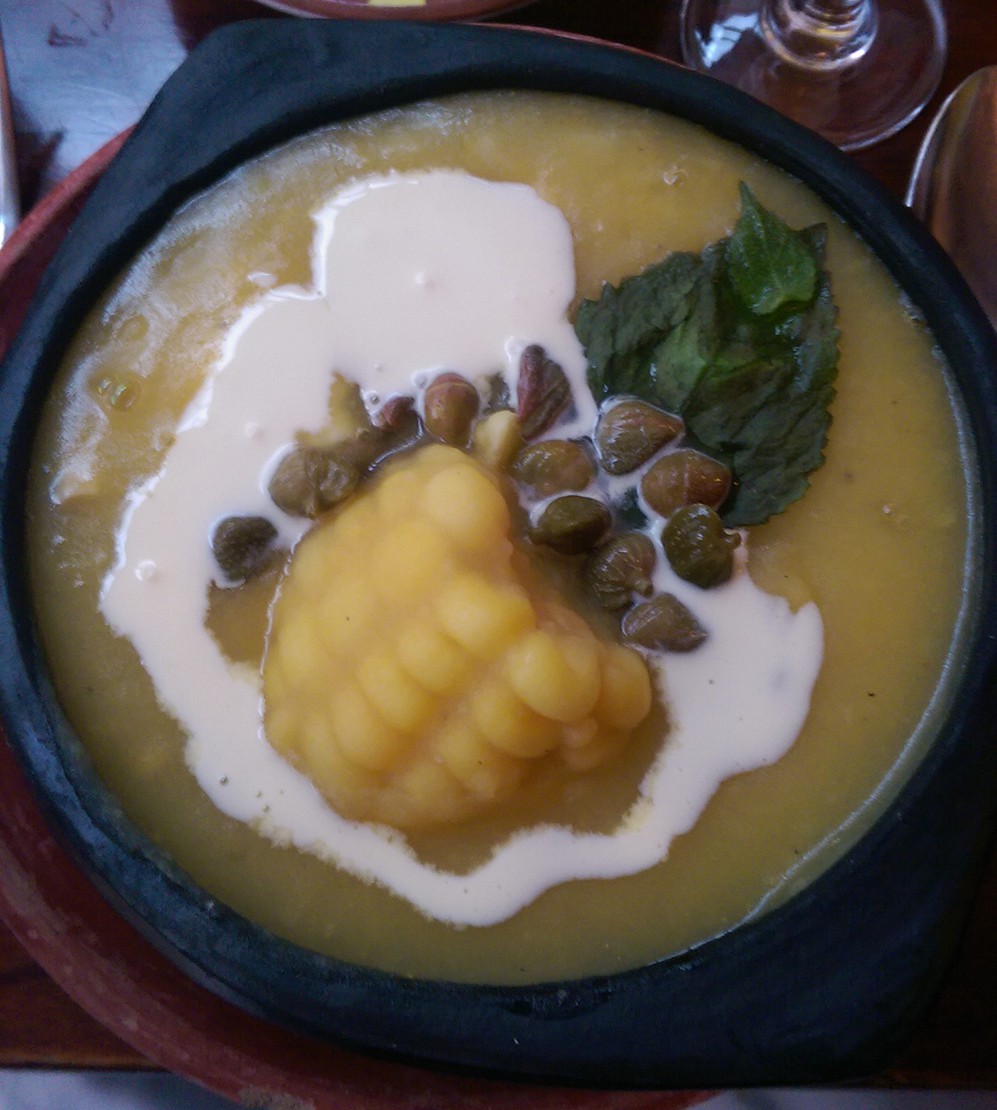 The rest of Wednesday wasn’t massively interesting. We bought me sandals and a wedding shirt, called a Guayabera, in a smallish shopping mall. We then walked to Casa Vieja, a local restaurant, where I ate a traditional Ajiaco soup: a mix of corn, chicken, a variety potatoes, güascas (a green plant). Dessert was a selection of sweet fruits, some candied.

That evening, Lily took me to her favorite bar. It’s in Usaquen, a fairly posh part of town where the drinks rival Manhattan prices, but are loaded with way more alcohol. Our martinis were huge. The conversation was still political. Here’s a summary.

It’s illegal to drink at all and drive, and yet seatbelts aren’t mandatory in the back seats of cars. You can buy birth control – as much as you like – over the counter here, with no prescription, no ID needed. There was a lady who won an election campaign solely on being anti-gay. I checked my phone while Lily was in the bathroom, and saw an ad for “Guevara” car insurance – a revolution in car insurance.

There are good parts right next to bad parts in Bogotá. I was going to make the similarity between Manhattan and the Bronx’s proximity in New York, but Lily then told me a story about a girl who got off the bus one stop early, in the bad part, and was almost raped in the street, pleading for help from others who ignored it and walked by. Bad stories here are always a little worse.

There are two major universities here, one public (Universidad National) and one private (Universidad de los Andes). Lily wanted to challenge herself by getting into the public one – obviously it’s harder to get into the university that’s fully means tested. But, her father had told her she could afford to go private, and if she went public she’d be depriving someone else from going to university who couldn’t afford a private education.

In Universidad de los Andes, security is tight. Rich kids turn up with three cars of bodyguards. Accredited bodyguards can get in with their security passes, and actually sit in on the lessons. One of Lily’s professors made bodyguards leave the classroom. The spoilt kids all went into management, the rebels (like Lily) did art. A lot of kids there actually were aware of how much money they owned. Some became more interested in doing social stuff, in helping people.

We met a friend of hers at another bar, had a couple of pints, and moved on to a late-night salsa bar called Quiebra Canto. Clockwork Orange, Taxi Driver, Natural Born Killers and more were on the walls. Their only cocktail was a heavily-loaded gin and tonic for $10/drink. The music was a shitstorm of electronica covers of good songs. Guys lined the walls, all the girls were taken. Perhaps this is the same everywhere.

2 beers, a gin and tonic and a martini were all it took to get us wasted. They must have been pretty heavy pours.