On Wednesday morning we took the boat back off the island, caught the bus back to Cartagena and got a short cab to another bus station. There, I helped pack our next bus, only to have the driver accidentally slam the door on my wrist, then tell us the bus was, in fact, too full to have Lily and me in it. We caught a later one to Santa Marta.

Once there, we were lied to by a bus conductor who said his bus was quick, and that in any case Tyrona national park would be open late as it’s peak season. Neither of these things were true, and by the time we got to the park it was closed.

We got in a very suspicious, broken-down minivan waiting at the gate. I say suspicious because the photos on the back window of the hotel it would take us to looked too good to be true, and it had a hotmail email address. We thought we might be in the next Tarantino sequel to “Hostel”. It creaked and sputtered up the road, the engine failing several times. But it finally arrived at “Villa del Rio”, which had a very cute puppy on the grounds. 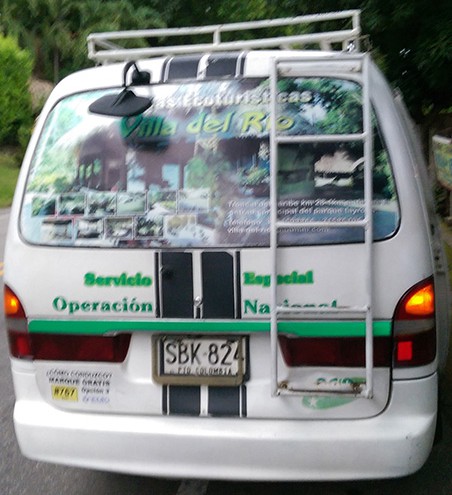 Thursday morning we woke, ate and walked to the entrance of the park. After a short induction into park rules and etiquettes there was a bus up a tarmac road to where our next transportation was waiting: horses.

This was one of those magical things that has long been banned in litigious societies. We paid, they brought us horses, we mounted them, and off we went. No question over whether we knew how to ride a horse, or if we’d done it before, or if we knew where we were going.

At times we were climbing or dipping down near-fatal inclines covered in menacing boulders. We sneaked through crevasses, thundered along flat paths (in full-on gallops) and although we could influence the direction we went in we struggled to reign in the passion of the beasts below us.

At least, that’s how it felt. I’m not sure I’ve ever gone horse riding before, and it was exhilarating. Still, I was in flip flops. Couldn’t have been all that. 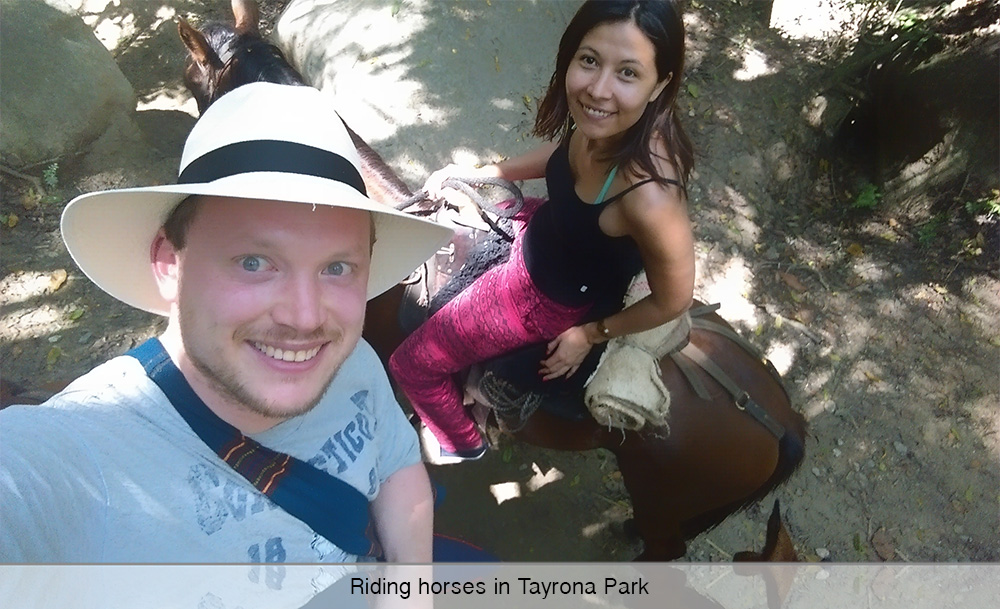 We parked our horses and walked through the jungle to a beach. This part I’ll skim, but yes, we swam, and yes, it was lovely. Here, we had my favorite meal of the whole trip – ceviche in plastic cups, a can of beer, a beautiful girlfriend in a bikini in a Colombian national park, overlooking the sea.

Although the sand wasn’t golden, it was flaked with fools gold that glinted as we walked.

The next journey I’ll summarise: walk to a restaurant, fruit juice, return horse ride, bus back to the park entrance, then a bus to the hotel where we’d left our bags, another bus to Santa Marta, then a taxi to our final destination, Minca. This, too, was a suspicious drive – over an hour of almost continual climbing up the Sierra Nevada mountains, in the dark, over very, very bumpy dirt roads. Thankfully, we weren’t kidnapped, and ended up in Minca safe and sound (if a little shaken by the trip).

Sierra Nevada is a huge mountain range that climbs straight off the coast. It’s the highest off-shore mountain range in the world, going from glaciers at its 5,700m top down to bright sandy beaches at its base. It looks like what you would expect from Colombian mountains, covered in dense, green foliage.

Minca sits near the base, only 700m up. The town is going through massive changes at the moment, as there are many gringos and gringas there for the beauty and the bird watching. Over the last few years the number of restaurants in Minca has soared from 4 to 40. Part mountain town (there are packs of randy dogs roaming the streets), part destination, surrounded by nature, inhabited by rural Colombians.

We ate a burger, met our hosts, Lily stayed up drinking tequila with them and I went to bed, using the excuse that she should catch up with her childhood friends, and I don’t speak Spanish. In reality, I was exhausted. The last two days had gone boat, bus, taxi, bus, bus, minivan, sleep, walk, bus, horse, walk, swim, walk, horse, bus, bus, bus, taxi.